The Annual Meeting of the Southeast Asia Library Group 2019 took place on 28-29 June 2019 in the Rouffaer Room and the Vossius Conference Room at Leiden University Library (UBL) in Leiden, the Netherlands, and was organised by Doris Jedamski and Marije Plomp. Participants from Germany, the Netherlands, and the United Kingdom attended the meeting this year.

Friday afternoon the participants gathered for the first part of the programme. Doris Jedamski welcomed the participants present, noticing that the vice chairperson had not yet arrived. Due to a mix-up, an anxious search for Holger Warnk was started in the library building. Finally, it turned out that he had not even reached Leiden yet but that he was stuck in a major traffic jam. With some delay but very relieved the group opened the first session with a presentation by Marije Plomp, entitled War, Love and Paintings; The Correspondence Between Emiria Sunassa and Willem Pijper (1940-1963). Emiria Sunassa was one of Indonesia’s first modern women painters. Emiria was ‘rediscovered’ only about a decade ago, whereas many of the male painters of her generation had long become well-established names in the history of Indonesian Modern Painting. Due to the lack of data on her personal life and work, many questions related to her career have remained unanswered. Last year, Leiden University came in possession of the private correspondence (or a part of it) between Emiria and G.F. Pijper, a Dutch islamologist. Notwithstanding the personal nature of these letters, they contain references to Emiria’s work and career that provide answers to some of those unanswered questions.

The second presentation of the afternoon was given by Doris Jedamski: Resident Hartman, His Wife, and a Mysterious Album Amicorum. The album, although in a saddening state, contains, among other things, a number of extraordinary drawings. They are dedicated to Mrs. Hartman but often show Javanese temples discovered and/or restored by her husband, the Resident of Magelang, C.L. Hartman. One very rare, superb drawing by F. Junghuhn springs out; it shows the Hartman Residency in 1840 – ten years after the famous Javanese Prince Diponegoro had been trapped there by the Dutch to be banished. Not only did Junghuhn write a personal dedication to Mrs Hartman on the sheet, he also added a short poem-like text. The mystery of this album, however, lays in the fact that a well-concealed, handwritten ex libris proves that the album had a prior owner before Resident Hartman presented it to his wife as a gift.

After the tea break Doris Jedamski had prepared a small pop-up exhibition of selected items and manuscripts from the UBL/KITLV collections. She also invited the participants to visit the exhibition on the ground floor presenting the three items from the UBL and KITLV collections that have been inscribed in the UNESCO Memory of the World Register and related items.

In the evening the participants had dinner at The Prentenkabinet in Leiden. In preparation for the discussion scheduled for the Business Meeting on Saturday, the participants shared their thoughts on SEALG and its future: expectations, challenges and potential.

Saturday morning started with the South East Asia Library Group Annual Business Meeting. After a short welcome, the apologies of Christophe Caudron, Carina Enestarre, Annabel Teh Gallop, Claudia Götze-Sam, Per Hansen, Jotika Khur-Yearn, Mia Nilsson, and Margaret Nicholson were announced. Also San San May and Sud Chonchirdsin sent their apologies.
The minutes from the Annual meeting 2018 in Leiden, as well as the financial report that had been compiled by our treasurer Margaret Nicholson were presented and unanimously accepted by the present members. Margaret Nicholson had expressed her wish to step down as treasurer. She is willing to stay on until a successor has been found. The committee will seek a successor. Holger Warnk inquired if the so-called “Brexit” could have any impact on SEALG and its (modest) bank account in the UK. Jana Igunma explained that the account was set up before the UK joined the EU, hence no problems are to be expected.

Reports from the members:
Jana Igunma explained how she has been busy for the last two years with the preparations for the major exhibition on Buddhism in the British Library. Digitisation of Southeast Asian material at the BL continues, with Annabel Teh Gallop taking the lead in this initiative with manuscripts from insular Southeast Asia. Also, two staff members will retire in autumn 2019.

Holger Warnk informed the participants that his department might lose one junior professor. This will result in a lower budget for the library. The library will move to a new building yet to be built and with less space for the library. The library received several donations, among them two exhibitions (one on the caricaturist Zunar, whose work is banned in Malaysia). There is ongoing cataloguing work on the Kratz and the Vietnamese collection.

Marije Plomp has tried to expand the library’s acquisition by joining Library of Congress’ Collective Acquisition Program Southeast Asia for a two-year trial. Dropping student numbers for Southeast Asian Studies are disturbing. If this trend continues the library’s budget for SEA will be cut significantly (the KITLV budget is not dependent on student numbers). Other issues that keeps the subject librarian and her colleagues at the library busy: digital collections and copyright, a platform to offer access to sources in PDF and the need to preserve audiovisual collections through digitization. With the Leiden University Libraries’ focus still on Asia, there is extra budget and thus extra work for the curator and subject librarian for South and Southeast Asia. As the convener of two double/triple panels at ICAS 2019 and as a presenter, Doris Jedamski is currently focusing on ICAS. She furthermore curated the current library exhibition on the three UNESCO items kept at Leiden University Libraries: Panji – Diponegoro – La Galigo. Furthermore she announced the successful wrapping up of the digitization project concerning a selection of ca. 260 Panji manuscripts.

After the institutional news, the group discussed the SEALG blog. In order to stimulate the contribution of blog posts it is suggested to set up a schedule. Contributors can contact Jana Igunma. In addition Jana proposes to ask SEALG presenters to convert their presentation in a blog post.

The main topic for this year’s Business Meeting was how to proceed with SEALG while facing a steadily growing workload and a shrinking number of active members. What is SEALG? What do we want it to be and what is feasible? These questions formed the basis for a lively discussion. Although the number of members participating in the yearly conference and attending the Annual Meeting has never been large, the number has been decreasing the last few years. This, in combination with recent developments in the field of European libraries holding Southeast Asian collections made that the need was felt to evaluate the current state of affairs. SEALG is a member organization with half of its members from outside Europe. All members are library or archive staff working with South-East Asian collections. One of the organisation’s main objectives is to provide a network or its members, facilitate the communication and exchange between libraries and researchers, and also to advance the education of the public in South-East Asian studies. At present SEALG activities comprise an annual conference and business meeting, a yearly Newsletter, a website, and a blog. The Newsletter and blog posts inform librarians, scholars and others interested in South-East Asian studies. The yearly conference and annual business meeting offers members the chance to share knowledge and experiences, as well as disseminate news about projects, digital initiatives, conferences, and exhibitions. Whenever the meeting is held to coincide with a larger conference, such as EUROSEAS for instance, SEALG strives to organize a conference panel.

The interest in the yearly SEALG-meetings seems to be decreasing, the number of members that attend the meetings is diminishing. One major factor that might be responsible for this is the lack of funding/support from the employer. Moreover, more and more South-East Asian collections are managed by subject librarians for Asia General. The enormous workload all library staff is facing does not help either, and library staff without Special Collections feel less appealed (SEALG’s output is often related to Special Collections). As one possible reason the point was also raised that holding the meeting twice in a row at the same location could have caused this year’s meagre participation. All members present at the meeting confirmed that they deemed it important and worthwhile to meet fellow librarians at the SEALG conference and Annual meeting for the exchange of knowledge and experiences, even in a small group. The annual meetings were seen as informative, inspiring and a good way to strengthen the network one could always rely upon for help and advice.

It was felt that SEALG could and should take some kind of action to attract more members to the conference. One important step would be to clearly communicate to the members that the topics presented and discussed are not exclusively related to Special Collections, on the contrary, topics are most welcome that are informative to librarians who work with modern collections only. Examples are copyright, metadata standards, workflows, acquisition, faculty liaison, library services for the various user groups, provenance issues, digitization and everything that comes with it, and so on. Hence, the invitations could be more specific, mentioning in particular topics that could be of interest to libraries with modern collections only. It was also proposed to consider adjusting the conference format, as the idea of having to present a paper might discourage members to participate. Several panels with round table discussions on topics of immediate interest to the participants could be an alternative format. Another point that came up was the possibility of engaging scholars in the conference by, for example, opening up the conference to the public. But it was also pointed out that there are just a few local academics working on Southeast Asia at any location that can host the annual SEALG conference. An attempt could be made to reach out to each individual member by sending a personalized letter. To gain insight into what topics SEALG members are interested in, a survey among SEALG member was proposed. Following the business meeting, the SEALG Annual Meeting continued with two presentations.

In her presentation Curating Buddhism Jana Igunma gave an account of her work as one of the curators of a major exhibition on Buddhism in the British Library. To be able to offer an exhibition that appealed to the public, an external consultant was involved at the stage of writing the initial proposal. In addition, visitor focus groups were invited to give feedback. This research resulted in four key messages that are addressed in the exhibition, 1) Diversity of Buddhist Culture, 2) Global Outreach of Buddhism, 3) Mindfulness and Contemporary Buddhist Practice, and 4) The Role of Women in Buddhism. One of the challenges was to offer a balanced geographic representation of Buddhism.

Holger Warnk’s presentation Cermin Mata: A Missionary Journal from 19th-century Singapore told the story of an early missionary journal printed in Jawi (Arabic script for Malay) in Benjamin Keasberry’s Missionary Printing House in Singapore in 1858. Much of the text was perhaps written by Keasberry and translated into Malay by Abdullah Munshi or Husin bin Ismail. Keasberry had a school where he trained young boys to become, among other professions, writers, printers and bookbinders.

The SEALG programme concluded with an extended lunch at the Hortus Botanicus. This year’s Annual meeting, like last year’s meeting, was kindly sponsored by the UB Leiden. 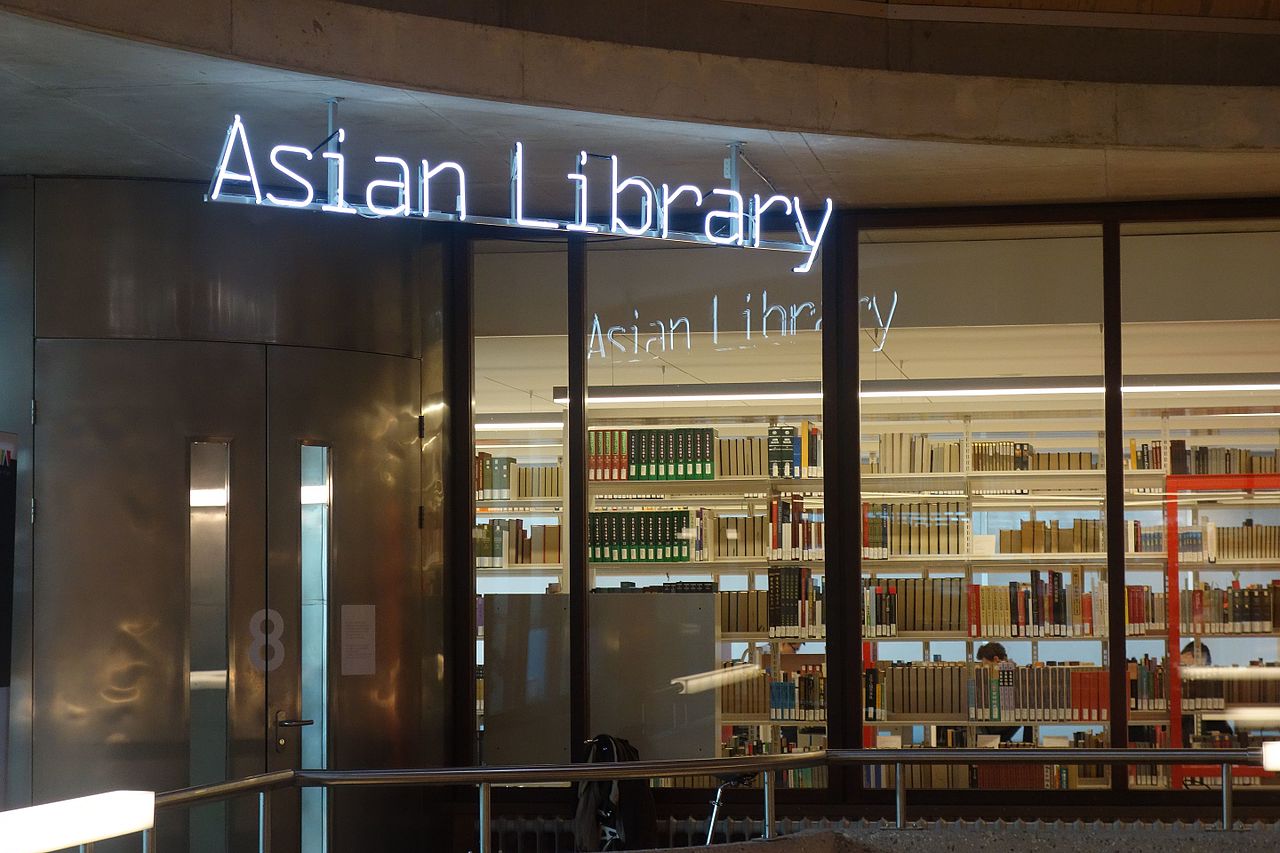 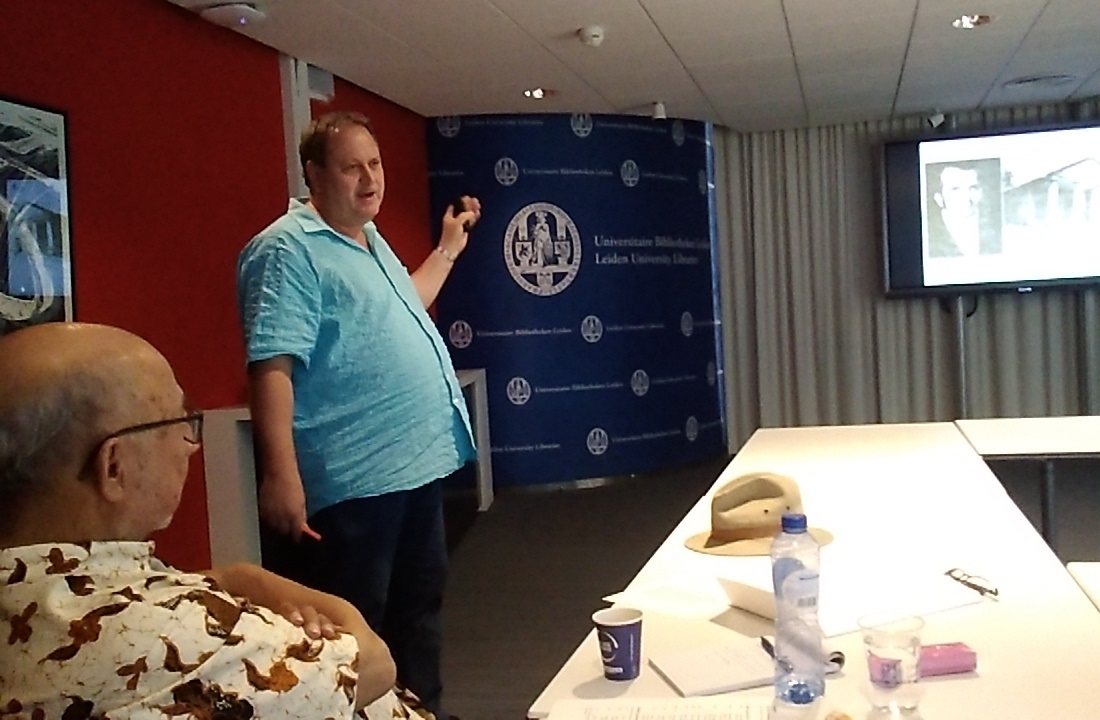 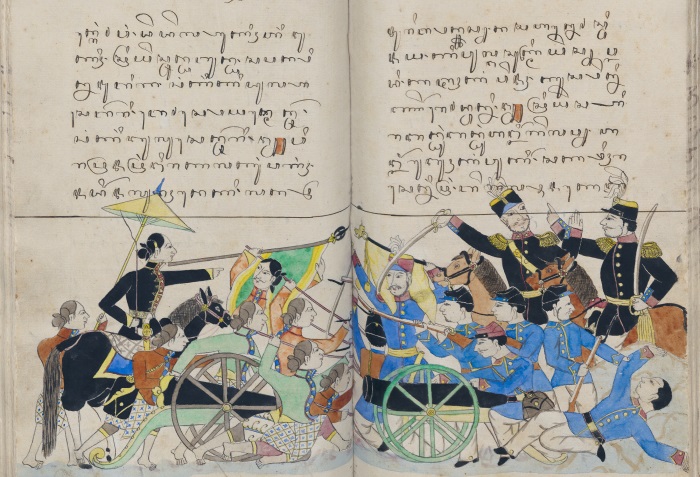 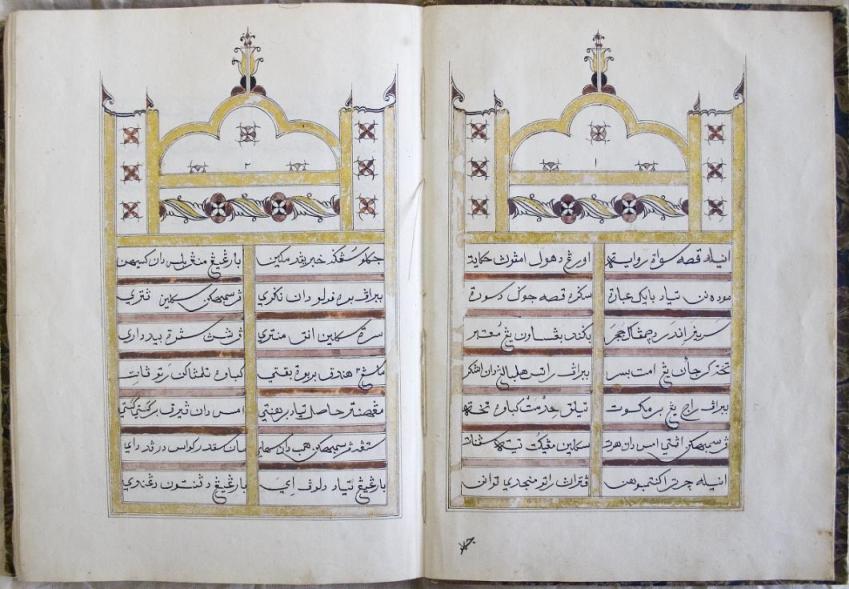